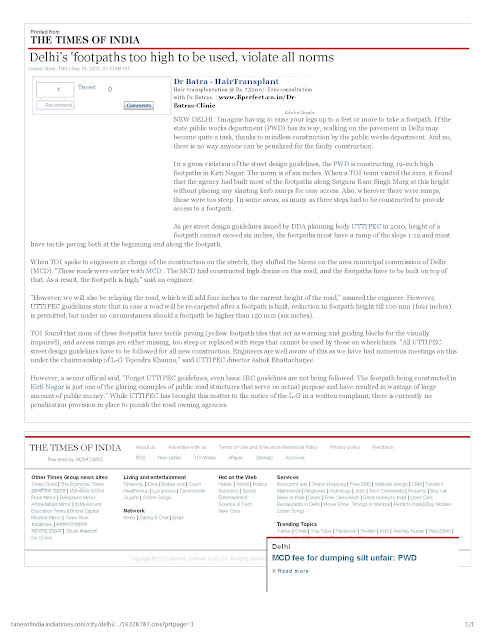 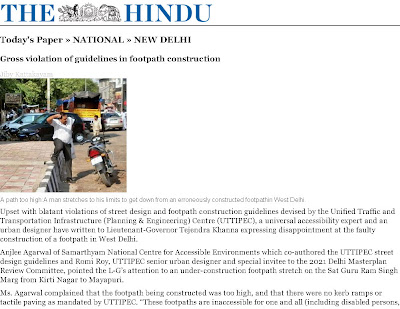 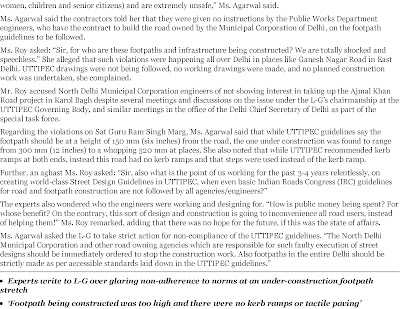 Live by the Metro or work near one 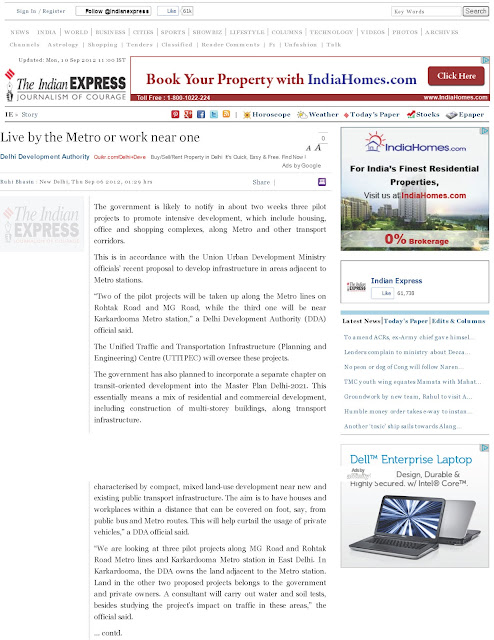 Aurobindo Marg does a U-turn 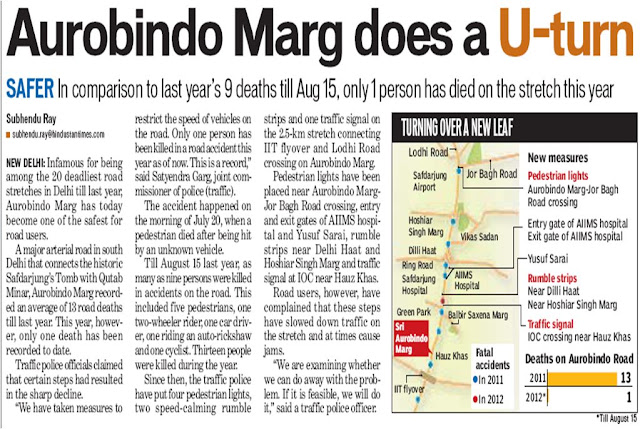 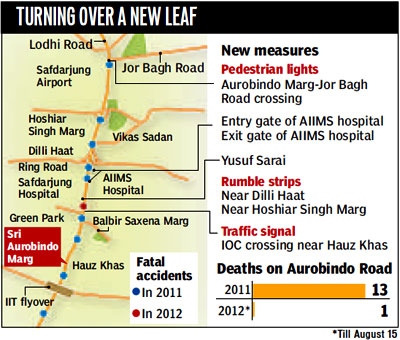 City’s Footpaths Too High to be Used, Violate All Norms

A giant step backwards
CITY’S FOOTPATHS TOO HIGH TO BE USED, VIOLATE ALL NORMS
Indrani Basu TNN
New Delhi:Imagine having to raise your legs up to a feet or more to take a footpath. If the state public works department (PWD) has its way, walking on the pavement in Delhi may become quite a task, thanks to mindless construction by the public works department. And no, there is no way anyone can be penalized for the faulty construction.
In a gross violation of the street design guidelines, the PWD is constructing 19-inch high footpaths in Kirti Nagar. The norm is of six inches. When a TOI team visited the area, it found that the agency had built most of the footpaths along Satguru Ram Singh Marg at this height without placing any slanting kerb ramps for easy access. Also, wherever there were ramps, those were too steep. In some areas, as many as three steps had to be constructed to provide access to a footpath.
As per street design guidelines issued by DDA planning body UTTIPEC in 2010, height of a footpath cannot exceed six inches; the footpaths must have a ramp of the slope 1:12 and must have tactile paving both at the beginning and along the footpath.

When TOI spoke to engineers in charge of the construction on the stretch, they shifted the blame on the area municipal commission of Delhi (MCD). “These roads were earlier with MCD . The MCD had constructed high drains on this road, and the footpaths have to be built on top of that. As a result, the footpath is high,” said an engineer.
“However, we will also be relaying the road, which will add four inches to the current height of the road,” assured the engineer. However, UTTIPEC guidelines state that in case a road will be re-carpeted after a footpath is built, reduction in footpath height till 100 mm (four inches) is permitted, but under no circumstances should a footpath be higher than 150 mm (six inches).
TOI found that none of these footpaths have tactile paving (yellow footpath tiles that act as warning and guiding blocks for the visually impaired), and access ramps are either missing, too steep or replaced with steps that cannot be used by those on wheelchairs. “All UTTIPEC street design guidelines have to be followed for all new construction. Engineers are well aware of this as we have had numerous meetings on this under the chairmanship of L-G Tejendra Khanna,” said UTTIPEC director Ashok Bhattacharjee.
However, a senior official said, “Forget UTTIPEC guidelines, even basic IRC guidelines are not being followed. The footpath being constructed in Kirti Nagar is just one of the glaring examples of public road structures that serve no actual purpose and have resulted in wastage of large amount of public money.” While UTTIPEC has brought this matter to the notice of the L-G in a written complaint, there is currently no penalization provision in place to punish the road owning agencies.
Source: Times of India
Posted by Admin at 3:59 AM No comments: